Double Trouble: Blagg and Hemphill are stamping their names in the record books 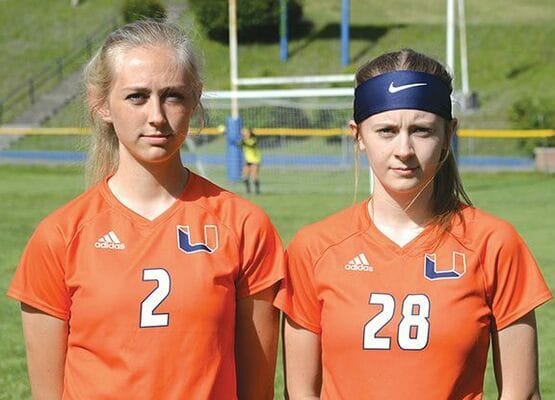 Juniors Isabella Blagg (left) and Emma Hemphill are breaking some records on the soccer field this year. PHOTO BY KELLEY PEARSON

Two members of the Union girls’ soccer team are making their presence felt on the pitch this year. Juniors Emma Hemphill and Isabella Blagg are setting school records and making their runs at the VHSL Record Book as well with their prolific performances.

Through 16 games this season, Hemphill has posted 50 goals and 21 assists while Blagg has 43 goals and 18 assists. Tack on freshman Peyton Davis’s 31 goals and 16 assists thus far, and all three have broken the school record for goals and assists in a season. Whose record did they beat? That would be Hemphill, who in her first season at Union as a sophomore last year, scored 26 goals and posted 12 assists.

“It feels very good and I’m proud of both of us and Peyton,” Emma Hemphill stated.

Blagg and Hemphill are life-long soccer players, both getting started in the game before they entered primary school.

Hemphill and her family are from Stafford, Va. In their neck of the woods of northern Virginia, soccer is just as popular as any other sport. It was a bit of a shock when they moved down here and discovered their beloved sport is less in demand.

“It was definitely different,” Emma Hemphill stated. “Football here is like soccer where we are from. It’s everywhere.”

When Emma’s father James Hemphill took over as head coach this year, it was quite a surprise to him exactly how “back to basics” he was going to have to go for some of the members of the team.

“My biggest challenge was just teaching basic soccer,” coach Hemphill stated. “I told them at the beginning of the season, we’re going to harp on the basics. We’ve worked on shots, passing and field knowledge. These ladies have been very receptive. They consistently come to either me or coach (Sarah) Smith and ask questions or for pointers.”

Last year, the Lady Bears’ soccer program took a tremendous turn for the better under the tutelage of head coach Robin Tiller, making it all the way to the Region 2D tournament.

“Coach Tiller was wise enough to recruit athletes,” coach Hemphill said. “And these girls on the team, in addition to being athletes, are all willing and hungry to learn.”

“When I first started on the team, people told me that they barely used to win,” Emma Hemphill said of the Lady Bears’ turnaround. “We struggled a bit when we first started last year, but we started getting a lot better as a team. I was very proud of all of us.

“Everybody started out with their strengths because we are all athletic, so we were able to use those strengths and we just started winning,” she continued.

“Starting last year, half of our team had never played before. But, we all worked together and those of us with more experience helped out and taught basics,” Blagg said. “Everyone really wanted to learn and get better and we did.”

“It’s the same thing this year,” Blagg continued. “Everyone constantly wants to get better.”

Both Blagg and Hemphill also praised the work ethic of all of the players on the team, very clearly stating that their prolific offense could not take place without the hard and non-stop work of the midfield, defense and goalie.

“They’ve improved so much in the last two years,” Emma Hemphill said. “They always put forth a lot of effort every game.”

“Our defense has come a long way,” Blagg said. “They never quit. They stay on the ball. We couldn’t do it without our defense.”

Coach Hemphill is trusting of Blagg and Hemphill as his field generals, helping to run the team.

“There are very few times I have to stop what I am doing and give them any advice,” coach Hemphill said. “I do let them go, but I’m not hesitant to make suggestions. I like to watch them put on a show.”

The team as a whole is successful as well. In 16 games, they have posted 131 goals as a team, an average of 8.3 goals per game while allowing only 21 goals (1.2) per game. They have also mercy-ruled (up by eight goals at the halfway point of the second half) teams in eight of those 16 games. They have only lost one game against a 2A opponent as Graham took the victory in the first game of the year. Their remaining losses have been to Class 3 Abingdon, who will advance to the Region 3D tournament next week.

It’s not just school records these girls are demolishing. The VHSL record book will be sporting the names Blagg and Hemphill after this year. Hemphill is currently 25th for most goals in a career with her 76 over the past two years. She needs just three goals to be enter the top ten list of most goals in a season. She is currently 8th on the list for points in a season with 121 points and counting. (The VHSL awards points in a season based on two points for each goal and one for each assist.) She needs just 13 more points to overtake former Gate City and University of Tennessee star Anna McClung’s total of 132 in her junior year. With 18 more points, she would also overtake McClung’s total in her sophomore year.

Blagg is only 11 points away from breaking the top 10 for most points in a season with her 104 points and counting.

The biggest thing these girls want their success to accomplish is to make soccer more popular in the area. They hope to appeal to more of their classmates to come out for the team. They definitely want to go as far as they can in the district, regional and even state tournament this year, but as they only lose one senior, they are truly excited to see what next season will hold.

“I think we have a chance to make it (to state) both years,” Blagg said. “I really just hope this shows people how fun and exciting soccer can be. I want us to have as much publicity as other sports do.”

“I hope their success now can draw attention to some other players to come out,” coach Hemphill said. “I want to make sure girls aren’t afraid to come out just because they haven’t played before. A lot of our girls are still new and doing a great job. Hopefully seeing our success and knowing this will bring potential players over that hump.”

The Lady Bears have at least three more games to play this season with two in the district tournament and as the top seed from the Mountain 7 in next week’s Region 2D tournament. With the way these two players have been scoring, more records could definitely fall before their season is over.

Lady Bears down Abingdon for first ever tournam...